March 03, 2022
With her most popular character about to be adapted for TV, novelist Melanie Joan Hall, Sunny Randall's benefactor, is accused of plagiarism. Soon after hiring Sunny to investigate her accuser, Melanie Joan is jolted by the murders of her manager and editor. Lupica's fourth Randall continuation is an aptly-named tour of Melanie Joan's past, much of which she resists revealing. Meanwhile, Sunny's retired cop father Phil finds himself targeted for revenge. 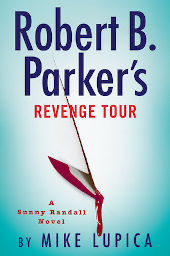 Lupica draws on his own origins in creating Melanie Joan's. In what looks to be his final Randall novel before moving on to Spenser, he once again shows familiarity with characters from all of Parker's series, including one of Parker's most chilling and manipulative villains.

Robert B. Parker's Revenge Tour goes on sale May 3. Thanks again to Putnam Books for the NetGalley.