A WRITER PREPARES by Lawrence Block

June 24, 2021
Prolific author and anthology editor Lawrence Block began A Writer Prepares as a memoir of his early years in publishing, from ages fifteen to twenty-eight, 1953 to 1966. He wrote about half the book in 1994, but shelved it until early 2020. Publishing it himself today, his eighty-third birthday, Block considers his early career from two perspectives roughly twenty-five years apart. 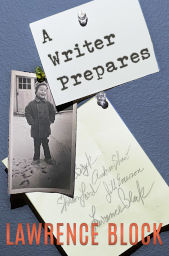 Having earned creative writing degrees in college, I'm a fan not only of Block's fiction but also his capacity for insight into what he's written and his ability to communicate it, to teach.

Though A Writer Prepares covers wide and multiple stretches of time, it's told in the same down-to-earth, conversational tone as his popular writing manuals and again shows his knack for hooking readers.

I particularly appreciate A Writer Prepares after the pandemic year we've had, during which no doubt we've all pondered mortality, and on which Block also spontaneously touches. Happy birthday, Larry. I'm glad you got to publish this book and we get to read it.