May 11, 2020
Beauregard "Bug" Montage is a getaway driver turned honest mechanic settled in Shepherd's Corner, Virginia. When an old associate asks him to drive for a can't-miss jewelry store robbery, Bug is reluctant, but with his mother's longterm care bill due, his estranged daughter needing money for college, and his customers headed to a larger competitor, he has little choice but to accept. 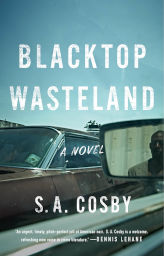 Bug and crew pull off the robbery and split the money, and Bug splits his share between his mother's nursing home and his daughter. However, the jewelry store is also a front for a crime boss who comes after the crew one by one.

Blacktop Wasteland is a short book by today's standards. It is a slick contemporary caper in which every character, much like Bug, is pressured to participate. It's also breakneck violent and noir as noir can be. At the same time, Cosby's lyrical, figurative prose is to be savored, not skimmed.

Blacktop Wasteland will be published July 14 by Flatiron Books, sure to be one of the summer's hottest reads.

ROBERT B. PARKER'S SOMEONE TO WATCH OVER ME by Ace Atkins